​Pastor Dave Keck was born on June 7, 1965. He grew up in Kannapolis graduating from A.L. Brown High School in in 1983. He graduated from Lenoir-Rhyne University in 1987 with a degree in Business Administration. He worked as an Admissions Counselor for several years for Lenoir-Rhyne and then for the University of South Carolina before entering Lutheran Theological Southern Seminary in Columbia. During seminary he spent his internship at Our Savior Lutheran Church, Vero Beach, Florida. He received his Masters of Divinity from LTSS in 1996. He was ordained at St. John's Lutheran Church in Salisbury on August 15, 1996 and served as an Associate Pastor at Good Shepherd Lutheran Church in Raleigh from July 1996 to May 2001, at which time he became the Pastor at Mt. Olive Lutheran Church in Hickory where he served for 15 years. He began his ministry at St. Mark's in Mooresville on May 15, 2016.

Pastor Dave is married to Nina Keck. Nina is a Physical Therapist employed by Autumn Care in Statesville. They have two children, daughter Rachel, and son Robert.

Pastor Dave comes from a lineage of Lutheran pastors. His father, Dr. David Keck, Sr. is a retired pastor living in the Cherry Grove community in Mooresville. His grandfather, Dr. Albert Keck (deceased) retired from St. Andrews Lutheran Church, known as the College Church adjacent to Lenoir-Rhyne in Hickory.

Pastor Dave has been active within the North Carolina Synod and wider ELCA church by serving as dean of the Western Catawba Conference, as a voting member of the ELCA church wide assembly, and on the Lutheran Services Board of Advisors. He co-chaired the Lutheran Service for the Aging capital campaign Congregational Gifts committee and served on the Lenoir-Rhyne University Board of Trustees as well as other university committees. He also helped to coordinate synod senior high school youth retreats and served as a pastor/leader for Teens Encounter Christ.

He has served the Hickory community as a YMCA soccer coach, a board member of the Greater Hickory Cooperative Christian Ministry, an adjunct professor of religion at Lenoir-Rhyne University, and a member of the "Rev it Up" musical group comprised entirely of Lutheran church pastors. He was the lone Lutheran recipient of the Wake Forest School of Divinity Holy Land Ecumenical Grant Project which included 20 North Carolina pastors from 14 different denominations and culminated in a trip to the Holy Land.

Pastor Dave enjoys running, reading and recycling, along with worship and teaching. He is a talented musician and dramatist and has used his gifts to connect people to God through song, story and drama.
ASSOCIATE PASTOR VERN KINARD 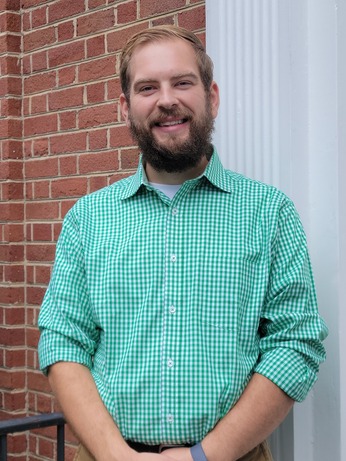 ​Pastor Vern Kinard was born January 16th, 1991. He grew up in Newberry, South Carolina and graduated from Lexington High School in Lexington, SC in 2009. In 2013, he received his undergraduate degree in Psychology from Newberry College. During his senior year of college and in the time before beginning seminary, Pastor Vern taught as a substitute teacher in the Newberry County School district. One of his favorite experiences from teaching was the half year experience he had teaching kindergarten at Newberry Elementary. Pastor Vern began seminary through Lenoir-Rhyne University at Lutheran Theological Southern Seminary (LTSS) in Columbia, SC in the summer of 2014. He received his Masters of Divinity from LTSS in 2018. Pastor Vern was ordained June 15th, 2018 at Grace Chapel on the campus of Lenoir-Rhyne University. Upon ordination, Pastor Vern served as Pastor at St. Luke’s Lutheran Church in Tyro, North Carolina. While in Tyro, he served the community as a volunteer firefighter and as the announcer for Varsity Baseball at West Davidson High School. Pastor Vern was called to serve as Associate Pastor at St. Mark’s in Mooresville on November 1st, 2020.

Pastor Vern is married to Mandy Kinard. Mandy is a graduate from Lenoir-Rhyne University and is a certified occupational therapist in a pediatric OT setting. Pastor Vern & Mandy live in Mooresville and have a Labrador Retriever mix, named Chloe.

Serving in ministry in Iredell County seems to run in Pastor Vern’s family. His grandfather, Vernon Frick, served in congregations throughout North and South Carolina, one of those being Holy Trinity in Troutman, just north of Mooresville. Both of his parents live in Newberry County and have worked in public education in their careers. Pastor Vern also has two sister’s (Abby & Gretchen) who live in Lexington, South Carolina and Columbia, South Carolina. Both sisters are registered nurses.

In addition to serving two congregations after ordination, Pastor Vern has served in the North Carolina Synod through the synod campus ministry board, as a stated supply at a congregation in Rowan County, and served as Vicar at Bethlehem Lutheran Church in Hickory and campus ministry at Lenoir Rhyne University for his seminary internship. He also has served as a spiritual director for the Western North Carolina Via De Cristo movement.

Pastor Vern is an avid sports fan and lover of being outdoors. He has a passion for ministry with youth and young adults. As a fun way to give back to the community, Pastor Vern volunteers at Mooresville High School, where he is the “voice” of Blue Devil baseball. In addition, he is a musician (trombone), enjoys cooking, traveling, and playing golf in his free time. Pastor Vern never meets a stranger and welcomes you to come and see what God is up to through the community of St. Mark’s!